Utopia has changed sides. It’s utopian to think business as usual is an option. It’s realistic to argue for radical change. Actors in the social economy are growing in size. As for conventional businesses, they are increasingly questioning their traditional practices. This presents us with an opportunity. We need to get beyond the idea that these models are irreconcilable. Let’s disseminate good practices in all organizations, create more wealth, and share it more equitably.

Whatever legal form they may take, all businesses can both contribute to individual emancipation and benefit wider society. This is not to do with taking the place of the state. It’s about expressing a collective commitment to social transformation. This is what GROUPE SOS has always been about. Grounded in its values, Europe’s lead- ing social enterprise has followed its own entrepreneurial path with one key aim: revolutionizing the world through a better understanding of it.

Jean-Marc Borello believes businesses must rise to the challenge of changing the world. He argues they need to leave behind sterile ideological debates, focus on com- paring economic, social and environmental impacts, and define a raison d’être. If they can do this, they will be ide- ally positioned to drive forward an ecological transition and promote social inclusion.

Jean-Marc Borello started work in 1977 as a special needs educator. In 1981, he was appointed to the French joint ministerial taskforce on drugs and drug addiction. He then took on different roles as a government advisor. He left the public sector in 1987 to become director of an SME consortium. He has been working full time at GROUPE SOS since 1997. He isthe former pres- ident of the Union des Associations de Lutte Contre le SIDA (Union of Associations Working to Combat HIV/AIDS) and was the first president of the MOUVES (the French Movement of Social Entrepreneurs). Borello also co-founded the En Marche political movement. His efforts to promote social enterprise as a viable model were recognized in 2016 when he was named as social entrepreneur of the year. This is his sixth book. 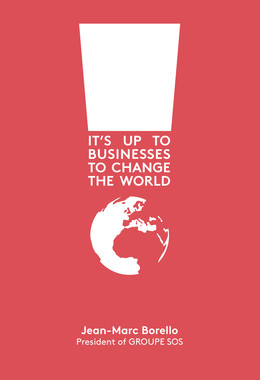