The aim of this publication is to demonstrate the effect of the neural networks on cognitive functions and behavioural patterns during the development phase of a child.

Taking as a basis the previous publication in this series dedicated to brain lesion localization and development, this time it is by examining in particular the frontal lobe, limbic system (hippocampus and amygdala) and visuo-cognitive system that this book looks at the close links between the neural networks and the future development of visual, cognitive and functional capacities.

The section on the frontal lobe concentrates on anatomy, mirror neurons, memory, executive functions, the neuropsychology of frontal lobe epilepsy and the resolution of social problems which can occur as a result of brain damage.

The part on the limbic system looks at neuro-anatomical organisation and the core functions of the hippocampus and amygdala, problems of language, music, emotions or autism.

Finally, the section dedicated to the visuo-cognitive system summarises the visual field problems associated with focal lesions, the correlation with neuro-imagery and visual impairment in children born prematurely. 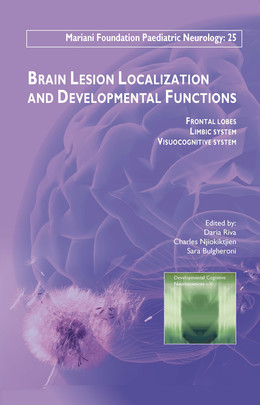